Frogs are possibly some of the most fascinating animals on the planet. Our amphibian friends come in a wide array of species, each with its own unique attributes and physiology. While some boast translucent skin or striking color combinations, others are more adept at blending in—that is, until they become an internet sensation. There is one amazing frog in particular that is currently circulating the web, and people aren’t quite sure what to make of it.

Earlier this month, a Twitter user posted pictures of a “rare creature” with an impossibly round, blob-like body and a duly expressive face. Since then, it has been retweeted, liked, and shared thousands of times, amidst many varied reactions. But the most common one of all has been to wonder what it is exactly.
Many have speculated that it is a shell-less turtle, while others joke that it is the evolutionary ancestor of Jabba the Hutt. But Twitter user Jodi Rowley, a “conservation biologist obsessed with frogs,” came forward and cleared the air. She confirmed that the bulbous creature is, in fact, a species of frog known as the Blunt-headed Burrowing Frog or Glyphoglossus molossus. And the reason it’s so fat and puffy is that it is inflating itself with air in self-defense so it appears large and threatening.
Still, there are a few people who remain in disbelief, questioning the existence of any such “creature” at all. However, with an estimated 8.7 million species of plants and animals on the planet—and only a small fraction of them discovered and identified so far—almost anything is possible.
This amazing frog is so big that it has baffled all of Twitter! Many people even questioned its existence.

However, one person identified it as a Blunt-headed Burrowing Frog that is puffing itself up for protection. 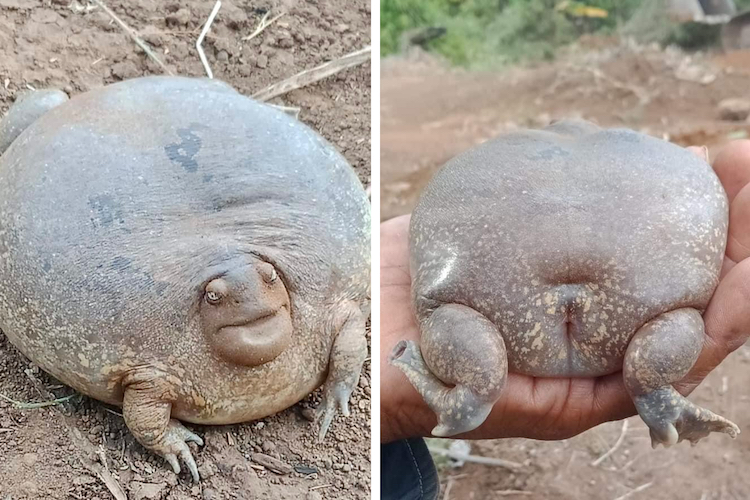 9 Deadliest Birds on the Planet

10 Breathtaking Places To Visit While In USA