These small, sassy dogs make excellent companion dogs, and they’re favored around the world for their small size, big personality, and relative ease of care. We’re going to go over the seven Chihuahua types in this post so you can see what the differences are, and we’re also going to touch on the breed’s history.

History of the Chihuahua

Although the exact origins of this breed aren’t clear, it is widely believed that the Chihuahua originated in Mexico, and it takes its name from the city of Chihuahua, Mexico. There is documentation of these dogs being used for food, as living warm packs to help with illnesses or injuries, and as pest deterrents.

Originally sold for a broad range of reasons, the AKC officially recognized the breed back in 1904 for long and smooth coated Chihuahuas. Since then, the breed has risen in popularity all over the world as an excellent companion dog for people of all ages.

However, as the popularity of this breed began to spike, so did questions about the different types. As we mentioned, the AKC officially recognizes two Chihuahuas, but you can find seven different ones, and we’re going to detail these, including:

This tiny dog has a huge personality packed into their compact frame, and they can be intensely devoted to their owner of family. They’re normally a fearless dog that can be very vocal when they want something, and this is why it’s essential that you train your Chihuahua and set firm rules for them to abide by.

This breed is better suited for families with no children or with older children because their small size makes them for fragile, and their big personality can make them slightly unpredictable. Also, they’re more prone to nip if a child were to grab them or continue to goad them once the dog has tried to get away.

Now that you know a little bit about the breed’s origins and temperament, we’ll outline the seven different types so you can get a good idea on which options are available to you if you’re considering one of these dogs. 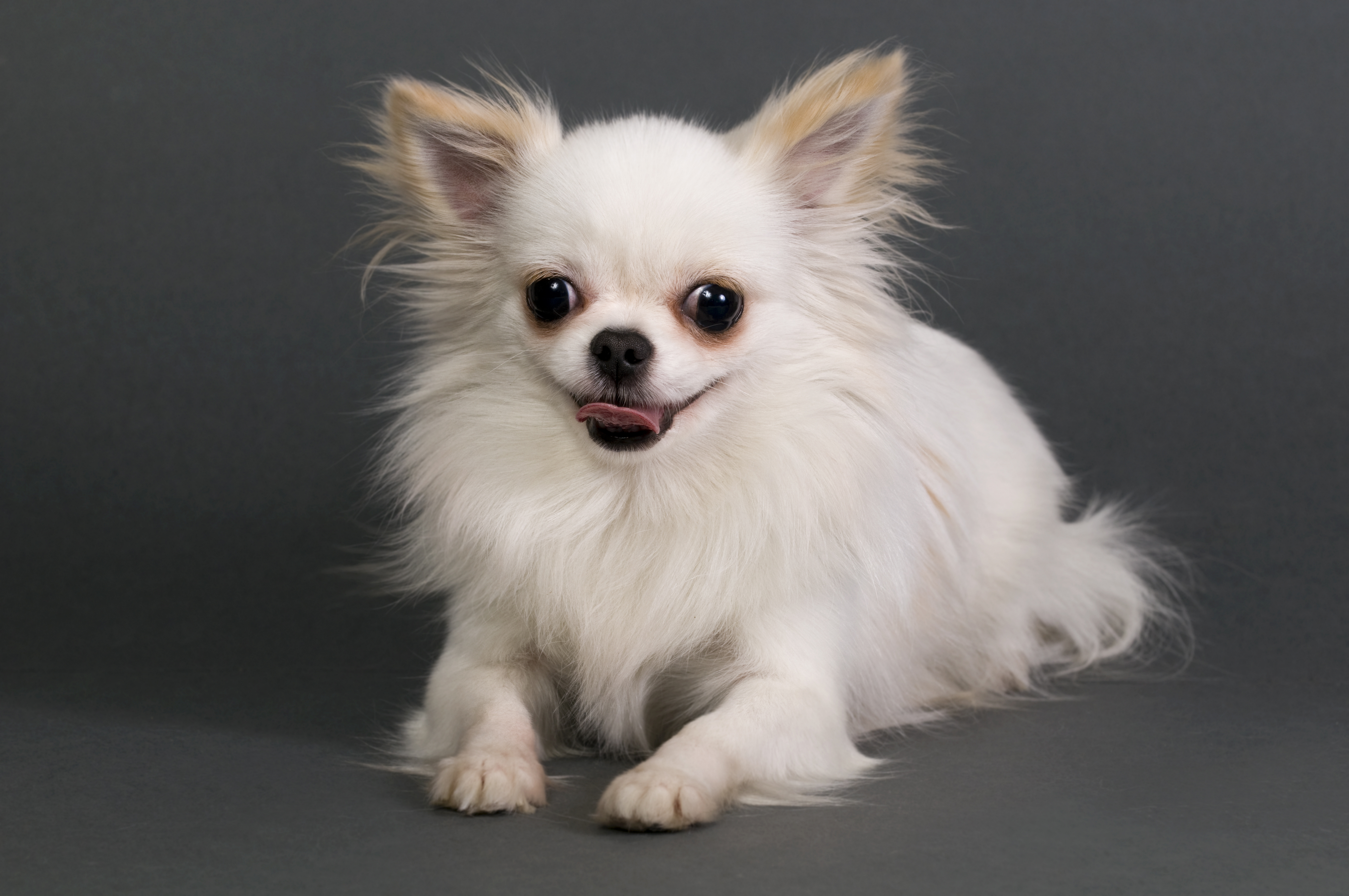 First up is the Long Coat Chihuahua, and the exact length of the coat recognized by different breed clubs varies. However, it takes around three years for your dog’s coat to reach the full length, and you should end up with a thick but soft coat once your dog fully grows it out.

While you won’t need to trim this dog’s coat regularly because it stops growing when it reaches a certain length, you do have to routinely brush it to ensure that it doesn’t knot, tangle or form mats, and the occasional trim will keep the ends healthy. This type of Chihuahua is very popular with people who want to show their dogs.

When you feel your dog’s coat, it should feel very smooth and soft to the touch, and it shouldn’t feel coarse or rough. Additionally, this dog sheds very little, and they require routine baths to keep their coat looking its best. 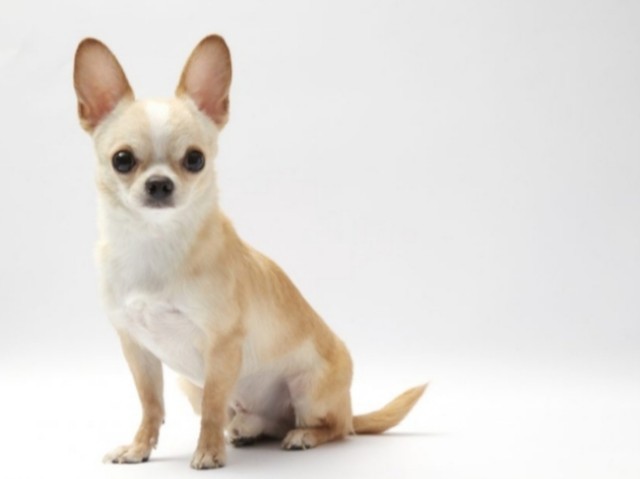 Available in a variety of colors and patterns, the Short Coat Chihuahua is extremely popular with people who don’t have time to dedicate to brushing or trimming their dog’s coat. Their fur is very dense, and it should have a smooth and slightly rough feel when you run your hand down their coat.

It’s important to note that this type of Chihuahua does shed more than the long coated variety as well as shedding year round, and this makes them more difficult for people with dog allergies to have around the house. However, their coat doesn’t require any trimming and only routine bathing to keep it healthy.

Since this dog’s coat is so short, you most likely won’t have to brush them out either, although this can help to decrease the amount they shed. You want to bathe your dog at least once a month to ensure adequate coat and skin health, or more if they tend to get dirty. 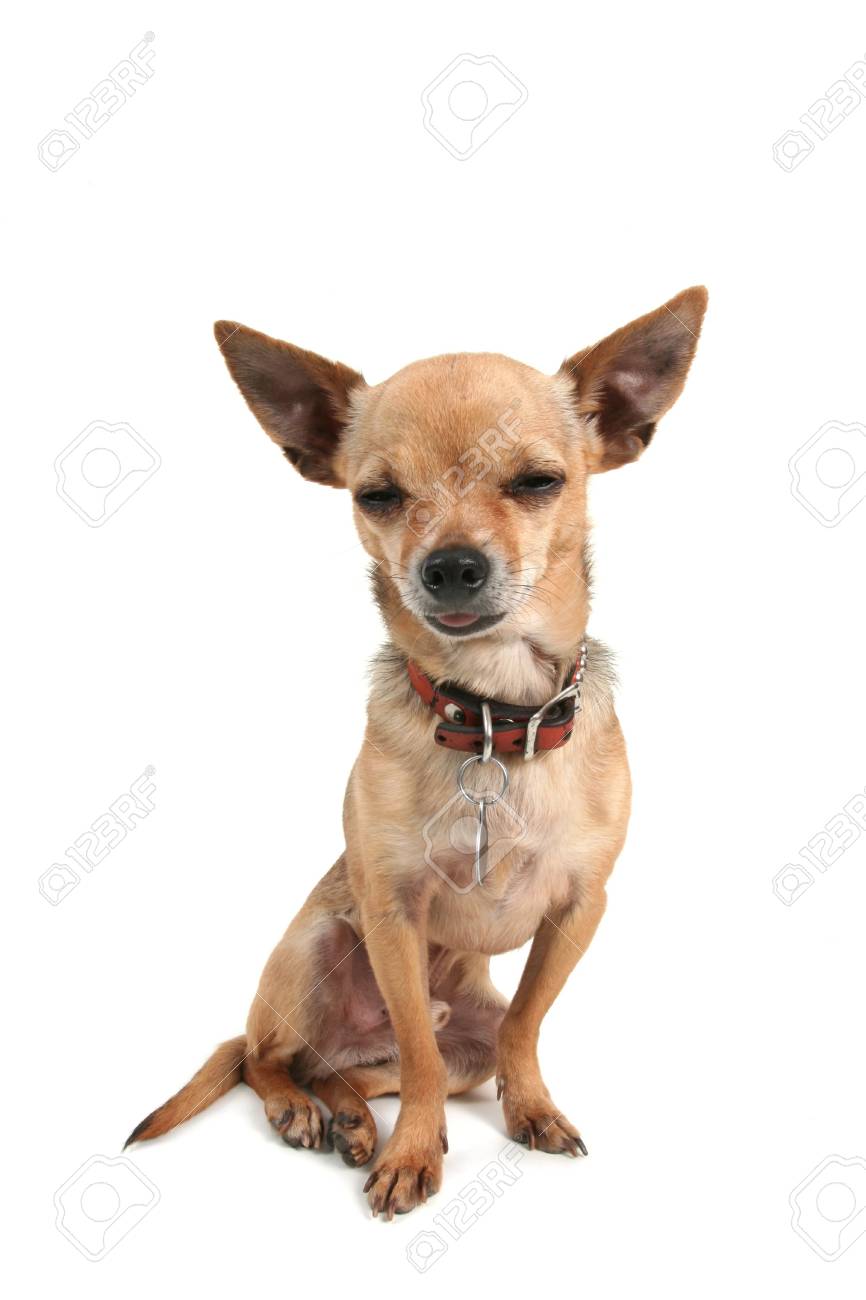 This type of Chihuahua has a slightly different body and head type than you traditionally see with this breed, and this makes them popular with people but less popular with organizations or breeders. The Deer Head Chihuahua has a slightly more elongated head with a longer and more narrow muzzle, wider set eyes, and a flatter skull like you’d find when you look at a deer.

Additionally, this type of Chihuahua comes with a slightly elongated body and longer legs than you’d find with most Chihuahuas, and this is why they aren’t accepted as a “true” Chihuahua classification for dog shows. Having this type of head and body makes them less prone to health issues, and it can mean that they’re healthier than other types, and they’re also favored as family pets. 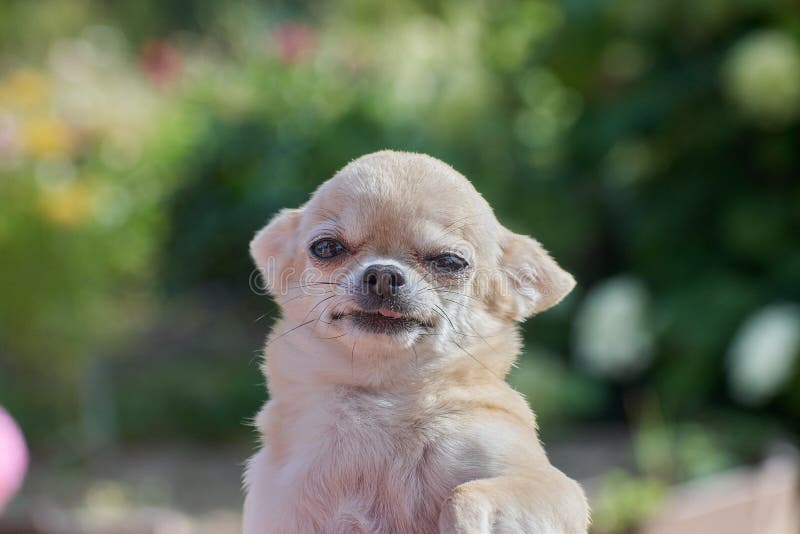 The Apple Head Chihuahua features a very rounded head that looks a little like an apple. They typically have a very short and small muzzle that sits at a 90-degree angle from their face. Additionally, this Chihuahua’s eyes are slightly bulged from their sockets, and they’re closer together than other types.

Unfortunately, this type of Chihuahua can easily suffer from fluid on the brain or hydrocephalus due to the head’s size and shape, so it’s important that you check before you purchase one. Finally, this Chihuahua has a slightly shorter and stockier neck than other types, and this can make their head look even larger. 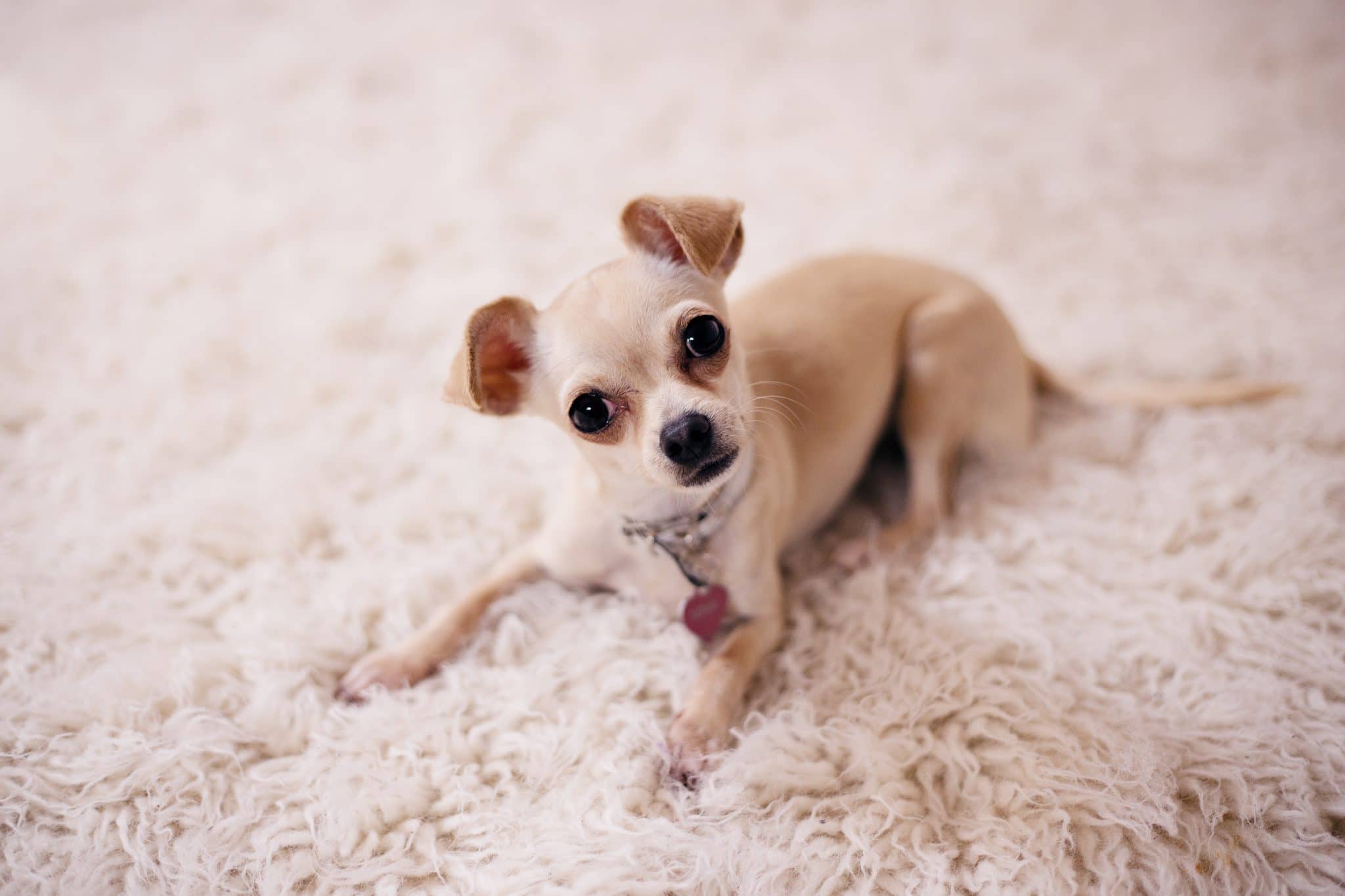 Unlike other classifications on our list, the Fawn Chihuahua isn’t a type or standard, it’s a coat color that people recognize. Fawn Chihuahuas can be either apple or deer headed, and they can have either long or short coats as long as they’re the traditional light brown or “fawn” coloring.

Again, the Merle Chihuahua isn’t a recognized standard like you’d get with a long or short coat Chihuahua. Merle is like the Fawn Chihuahua where it refers to the dog’s coat colors and patterns, and they’re striking to look at, so people assume they’re a specific type of Chihuahua. Merle Chihuahuas are typically multicolored with black, brown and blue or “Merle” patches on their coat, and it’s not unusual to find one with bright blue eyes. They can have apple heads or deer heads, and they can have either a short coat or a long coat. Unfortunately, Merle Chihuahuas are more prone to health issues, and this risk increases significantly if you breed two dogs with Merle coats together. The Merle gene gives your dog an increased risk of deafness, blindness, and eye problems. 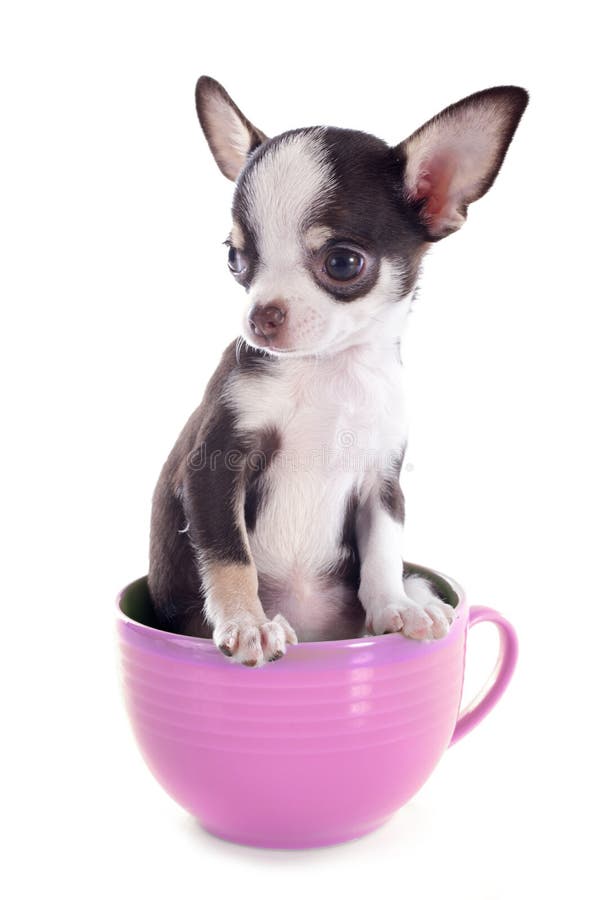 The final Chihuahua type is the Teacup or Miniature Chihuahua, and most people use these terms interchangeably. This type of Chihuahua generally stands nine inches tall or shorter, and they weigh in at five pounds or less when they’re fully grown.

Although this type of Chihuahua is very popular, many breeders frown on it because breeding for such a tiny size can potentially lead to health issues or problems with their joints and bones. However, this tiny type of Chihuahua has the same big personality and temperament that you’d get with a traditional standard Chihuahua.

They come in both long and short coat varieties, and they have several different colors and patterns including Merle or Fawn along with black and tan, red, and more. These dogs can literally fit into a teacup, and if your dog outgrows it, it’s not considered a Teacup Chihuahua anymore.

Chihuahua That Can’t Walk Becomes Best Friends With Pigeon That Can’t Fly, And Their Photos A...

This Bird Is Half Male And Half Female, A Rare Genetic Condition That Gives It An Unusual Appeara...

Showing How Animals Will Look Like Without Their Necks (32 Photos)

Top 10 Smallest Dogs in the World

Amazing Spectacle! Mother Crocodile Jump Into The Air To Punish Eagle To Keep Her Baby Safe